Let us now point our ears south down I-25 to Colorado Springs, a city whose music scene has been called many things but is never boring. As with any other reasonably big urban center, some COS bands languish in obscurity, some gain a regional following, and still others do exactly what they want to do, no matter who is listening. That’s what I think is happening with Rough Age.

“He’s at that rough age.” Get it? Pretty clever band name.

Rough Age flashed lean and hungry onto the scene two years ago, the collaboration of songwriter Nathan Archer with Tracy Santa and Michael Salkind (also a duo called Wild Hares) on bass and drums, respectively. The band’s full length debut, Before It Comes Apart, is available here and here. 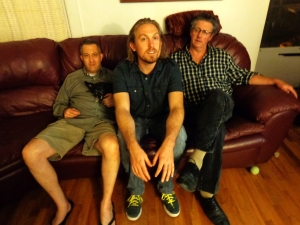 Rough Age, two seconds before they jumped up, grabbed their instruments, and rocked your face. (Image by Sarah Milteer)

“It’s much more of a collection of songs than a concept album,” says Archer. “The common thread seems to be portraits of people losing their shit or struggling in one way or another. A lot of those people are versions of myself or people I’ve known, like ‘Chemistry’ or ‘Tumbling Down’ and others are pure fiction, like in ‘Great Awakening’ or ‘Flammable Parts.'”

Speaking of Flammable Parts, let’s do a wee dissection of this tune. Gentle minor strumming, a touchy bass line sticking largely to root notes (thank you), and a very patient beat, some whistling, some organ. Sparse on lyrics, but they’re delivered in a pensive style that has to be compared to Elvis Costello, which should be taken as a compliment.

In another life, this might have been a hidden track on King of America.

Archer readily confesses the Costello influence, but there are others that we would all be so lucky to have on heavy rotation. “I’ve always loved songs with a sense of drama and danger, however gratuitous – stuff like Nick Cave, the Toadies, and especially Richard Thompson lately,” he explains. “We all love that early punk/pub-rock era, too – Elvis Costello is a huge (and probably obvious) influence of mine – I actually played keyboards in a Costello tribute last fall. I like to think I picked up a little of his vocal delivery, or his ability to deliver edgy, bitter lyrics with a sweet melody.”

Before It Comes Apart takes its name from the lyrics to “San Gabriel.” Grant me this indulgence to be dredged out from my heart / Before it comes apart 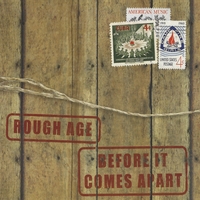 Archer: “I guess it’s both an accurate description of catharsis for me and an admission that some of the autobiographical stuff has been simplified in the lyrics.”

The album was recorded and mixed by a band friend, Dan Nelson, who runs Rainwerks Studios out of his house. Archer says more than half of the album (especially drums, bass, and electric guitar) happened live, much of it in one take. So if you’re looking for something as polished as your church shoes, keep looking. The mix is edgy.

I further asked Archer and Salkind how they would describe their music to someone who has never heard them, without making comparisons to other bands.

NA: “Smart-ass, catchy rock and roll with a touch of country.”

Another song from the album, “Al Jazeera,” seems to have some buzz. Acoustic driven, with a strum pattern that is part Sea Shanty, part Horah. A true head bobber about, well, I don’t know. It’s sorta cryptic. Holed up in your castle /You swear you’ll never leave / You’ll be replaced tomorrow with a new regime / Now, all around the world are shiny new facades / I saw it all on Al Jazeera

I’m a lyrics lover, and I am not satisfied with a song unless I know what’s being sung. In fact, I don’t appreciate the music bed as much if I am frustrated by not “getting” the lyrics. I like Archer’s writing. He describes his process: “It’s weirdly important to me that lyrics read well. I probably overthink them a little bit, but I want every song to have a setting, some kind metaphor or imagery, and some kind of narrative flow that directs the dynamics. A lot of these songs have several pages of backstory that never made it into the lyrics, which is why I can’t seem to write anything under three minutes. Too many verses. Hell, some of them have two bridges. Once I hit on a sound that really excites me, I’ll work backwards from it and think of a half-dozen stories I could build around it. It takes me a long time.”

The rock crowd will get into opening track “Adelita.” Santa has a rolling beat going, and there’s a dynamic shift late in the song that could easily free form into epic jam madness in concert.

“Achilles” is catchy as hell. It’s poppy. The bass and lead guitars compete to stay memorable, and they both win. Musically, this might be my favorite. There are numerous cross-genre moments on the album. You’ll listen to it a few times before you get a “sense” for it.

So where is Rough Age playing live? Next show is Aug. 31 at the Commonwheel Arts Festival in Manitou Springs.

I’ll give Nathan Archer the last word, and it’s about being in a Colorado Springs band.

“I think the local show experience sums up the good and bad pretty clearly: a bunch of great bands playing mostly to each other. I think we have a fantastic amount of talent here, but it does feel like there’s a pretty limited audience for original music. We’re probably better off than most; we’re not completely alien to the typical bar band and can play a few places the more experimental bands can’t. But there’s still this expectation with most people that a bar band should be playing classic rock covers and formula blues, and if you want to get out to where the ears are, you always have to fight it.”